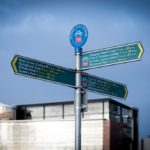 The elections are approaching fast, and things get busy from here. Here’s a quick cut-out-and-keep guide to what happens over the next few weeks as the campaign gets into gear:

What’s missing from this list? If you’re planning an election-related event – or are thinking of doing so – please let us know at contact@walkwheelcyclevote.scot. We’d love to list anything that’s at all relevant from a candidate’s cycle ride to a hustings on transport, public health, pollution, or the environmemt