For those of you who missed our Campaigners’ Day – or who couldn’t get to all the workshops they wanted – we’ll be getting the presentations online and/or asking our workshop leaders to give us a blog post summarising what they said. First off the mark is Clare Rogers from the We Support Enfield MiniHolland campaign

The first thing to say is: backlash is a good thing.

As Mark Treasure pointed out in one of his blog posts, if no one’s objecting, the proposed changes are probably not “reallocating road space in any meaningful sense”. We are lucky to have a councillor in charge of Enfield’s Mini Holland scheme who calls the opposition “a badge of honour” – pointing out that every significant social change in history has been opposed.

The Mayor of London’s Vision for Cycling allocated £100 million to transform outer London boroughs into Dutch-style oases for cycling. Three boroughs bid successfully for £30 million each: Kingston on Thames, Waltham Forest and Enfield. I’m in Enfield, so most of what I’m going to say is about our Mini Holland.

The plans submitted for Enfield’s bid represented some decent infrastructure, including wide semi-segregated cycle lanes on five A-roads, better junctions for bikes, and transformed town centres. The flagship plans for Enfield Town high street propose taking out three lanes of traffic to make way for bike and bus lanes only. This historic market town has a business vacancy rate of 20% – one of the highest in the country – and 700 cars an hour pass through it, mostly on their way to somewhere else. Plenty of people we spoke to on the high street during the consultation (especially parents) welcomed the proposals. Yet the plan has been vigorously opposed.

One reason Enfield won the bid was its potential for transformation. There isn’t really a culture of cycling in Enfield. Car ownership is high, and currently only 0.7% of journeys are by bike. The Enfield branch of London Cycling Campaign has only five or six active members. These stalwart members are excellent activists; though reflecting the kind of people who do cycle in Enfield, they are mostly male and somewhat older.

We first noticed opposition to the Mini Holland scheme when a plague of horrible yellow anti-Mini Holland posters appeared in shop windows along Green Lanes (A105), the first part of the scheme to be consulted on in the autumn of 2015. (Some windows had so many posters you could barely see in). The posters yelled: 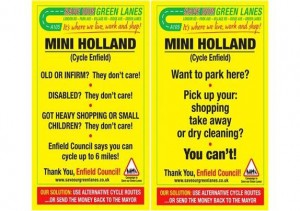 This was the work of Save our Green Lanes, a group backed by the local business association. The chair of the association is a big landlord on Green Lanes and many of the posters had appeared in the shop windows purely because he told the shopkeepers to put them there. Allied to them was a local MP, David Burrowes. While the Mini Holland bid originally had cross-party support, the conservative minority in the council later turned against it, no doubt because of the opposition from business owners and local Conservative voters.

David Burrowes held four public meetings, claiming to be neutral – yet all had panels skewed in favour of the antis, or no pro-Mini Holland representation at all. There was no attempt to engage people with the council consultation process. They were nasty, shouty meetings that merely reinforced the antis’ point of view. Burrowes followed this with a “referendum” of households in his constituency, and when 75% of the pre-paid postcards which were returned said “no”, he claimed this represented “a clear majority of my constituents”. (We looked at the numbers and worked out that they actually represented 3%.) 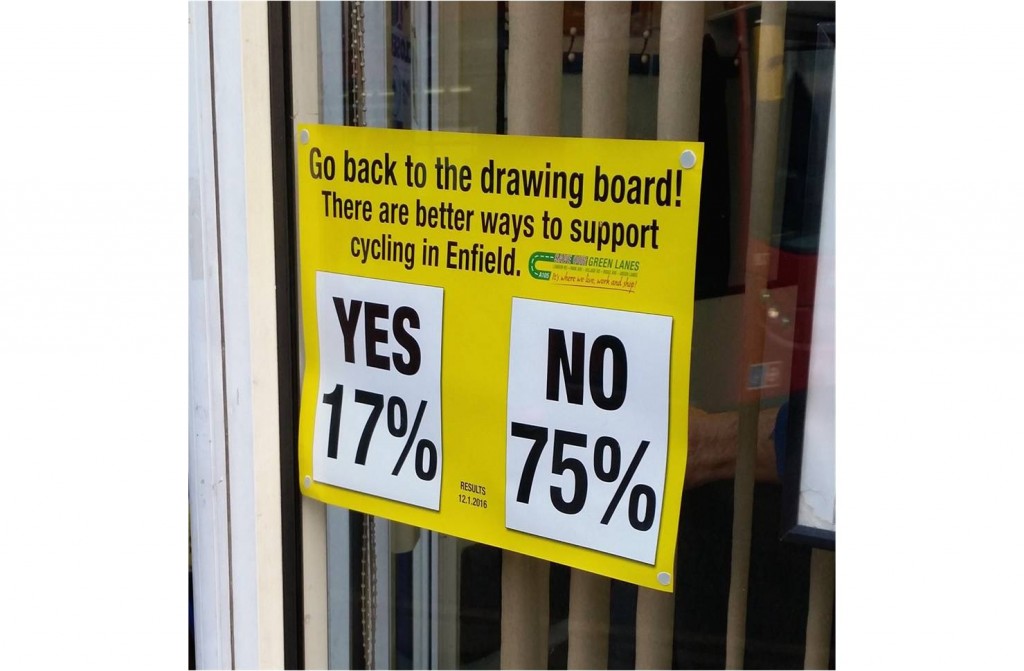 The opposition’s current plan is an attempt to take Enfield Counci to court on the grounds that their consultation process was inadequate. This was tried in Waltham Forest and failed – the judge found no grounds whatsoever for the antis’ claims and ordered them to pay £12,000 in costs. So good luck to them.

Responding to the backlash

Those nasty yellow posters did us a favour. Many locals found them offensive, including Guardian journalist Nick Mead, who wrote about Enfield’s “Bike lane blues” in the Guardian bike blog. As a result people suddenly found our Facebook group, We Support Enfield Mini Holland, which grew to about 200 members almost overnight (there are now 300). Interestingly, those joining were mostly non-cyclists. They included people who would cycle if it were safe; architects; a shopping journalist with an interest in regenerating high streets; play street organisers;  town planners;  parents, and people who simpler wanted a cleaner, greener environment. They included a good proportion of women. We began to meet face to face, along with Enfield Cycling Campaign members. Among other things, we’ve designed our own posters and leaflets; talked to shopkeepers and shoppers; handed out flyers at school gates; written letters and articles for the local press; done battle on social media; attended the MP’s public meetings and spoken up from the floor and the panel; and attended council meetings.

So here’s what we’ve learnt so far in our battle against the backlash:

The opponents fall into two categories. First, there are the committed activists against the scheme. Conversation with this group is almost impossible. Then there those with genuine concerns, who just need to hear the facts. Conversation with this group is worthwhile. The ‘anti’ activists rely on blatant misinformation, with no supporting evidence. So we spent some time myth-busting.

For instance, we produced a factsheet for local businesses, showing how cycle lanes are good for business. (If you’re having this conversation, the Cycling Embassy of Great Britain has some great evidence.) We were able to offer evidence countering all of the antis’ claims, such as 95% of customers come by car; most of the parking will be removed; congestion will be worse; and only current cyclists will benefit. Some people did listen; some shopkeepers even took their posters down.

Waltham Forest Mini Holland supporters did a much better job. They knocked on doors to speak to as many people as possible, and posted a great myth-busting page on their cycle campaign website. 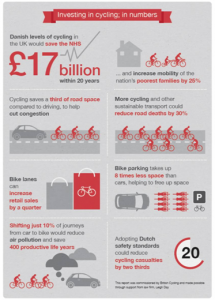 We learned to turn the conversation to the bigger picture:

Cleaner air: This was the tipping point for me. After I heard in 2014 that 9,000 people die prematurely in London every year from air pollution, I stopped using the car for the school run. (We bought a tandem, which is MUCH more fun.) In Scotland, estimates for air pollution-related deaths are now around 4,000 a year.

Attractive high streets:  People don’t like to shop on a high street clogged with traffic. Mini Holland offers greener, regenerated streets, and that has to be good for business.

Health and exercise. A shocking 24% of Enfield’s children are obese, and the whole country has an unhealthy level of physical inactivity. Rachel Aldred argues that Danish levels of cycling in the UK would save the NHS £17 billion over 20 years. If you travel actively to work or school, it’s very easy to get your recommended weekly exercise.

Famously, it was the “Stop the Child Murder” Dutch campaign in the 1970s that won space in the Netherlands back from cars. When it’s about children, people pay attention. Another turning point for me was hearing that there’s a positive correlation between countries where children can travel independently and high levels of emotional well-being. No surprise then that the UK has some of the unhappiest kids in Europe. And given that one-fifth of traffic in London at peak times is school run traffic, how much better would it be for everyone if kids had another way to get to school? The fact is, a city that works for children works for everyone.

Children are great at advertising the benefits of Mini Holland. At last year’s Enfield Town Christmas Parade of Lights, Enfield Cycling Campaign (who take part every year) involved kids for the first time. We had about ten of them, and members of a local cycling charity for disabled adults, on an array of bikes – tandems, a cargo bike, tagalongs, adult trikes, and tiny children cycling on their own. Judging by the reaction from spectators, many of them had never seen a cargo bike before (it helped that this one contained two very cute sleeping toddlers dressed as reindeer.) We were able to show that it’s possible – and fun – to get around with children without getting in a car.

We are very fortunate to have a council whose resolve strengthened in the face of all that opposition. But we’ve done our best to act as cheerleaders. It must be stressful for council members and officers to encounter the depth of feeling that Mini Holland has generated (although at least they haven’t had death threats, unlike East Dunbartonshire Council for the Bears Way scheme). So we’ve celebrated them whenever we can, on social media and in public debates. Even though we don’t support every aspect of the plans, we’ve kept any criticism to meetings behind closed doors – and even then we’re careful to say, “Overall this scheme is great! We just have concerns about this bit…”

The first part of the scheme, the A105, has now been voted through by the council; but there are three more consultations to go, and none of the roadworks have actually started. The battle is definitely not over yet.