Glasgow was an excellent place to kick off our very first event – the Green Party Conference ride. Not only because we got a great turnout, and were ably led by folk from Go Bike/Space for Cycling Glasgow – but because the city as a whole illustrates so much about why our campaign is needed.

Our ride took us over the recently opened ‘bridge to nowhere’ – a flagship project to reconnect two parts of the city long severed by the motorway. For over 40 years, the bridge stood as a half-built stub, a concrete reminder of Scotland’s priorities when it comes to transport. Now there is some recognition that a modern transport policy shouldn’t just be about motorised travel, and the money was found to turn the bridge to nowhere into a part of Glasgow’s nascent cycling network.

Glasgow has the lowest levels of car ownership in Scotland – half of all households have no access to a car. It also has some of the worst health problems in the country, and, in Hope St, the second most polluted thoroughfare in Scotland (St. John’s Road in Edinburgh has the dubious honour of taking top slot this year). Investing in active travel has to be a priority: the Glasgow Centre for Population Health recently calculated that even with the modest network already in place, cycling saves the city £4 million a year in reduced mortality alone. Building a network that would encourage people to cycle – without seriously compromising the safety and convenience of those who already walk – would pay the city and the country back many times.

Our ride explored the Clyde path, Glasgow Green, the segregated infrastructure on London and Waterloo Road and – of course – the Bridge to Nowhere. Although Glasgow has pioneered the use of kerbed tracks – and has shown itself willing to take some space away from roads – anyone on foot or on a bike still gets very little sense that active travel has priority over private cars, except in the shopping streets at the very heart of the city. Over an hour we experienced how bikes and pedestrians are brought into unnecessary conflict on narrow sections of the Clyde path, how roadworks around the Fastlink leave crossings (for bikes and people on foot) out of order, while the ones for cars are still in use, and how just 30 bikes simply couldn’t fit on narrow, penned-in, traffic islands, meaning it took us over 5 minutes to negotiate a single crossing. If Scotland ever does achieve its shared vision of 10% of journeys being by bike, then Glasgow’s cycle paths will be completely overwhelmed.

Thanks to the delegates who came to join us on the ride or just briefly to say hello – we appreciate that conference is a busy time for politicians. We’re looking forward to our next event, the SNP conference in Aberdeen, on Saturday – where the conditions may be a bit more challenging. We hope we’ll see the same levels of support and interest as we got in Glasgow – and a recognition that we can’t wait another 40 years to start to build a brighter future. 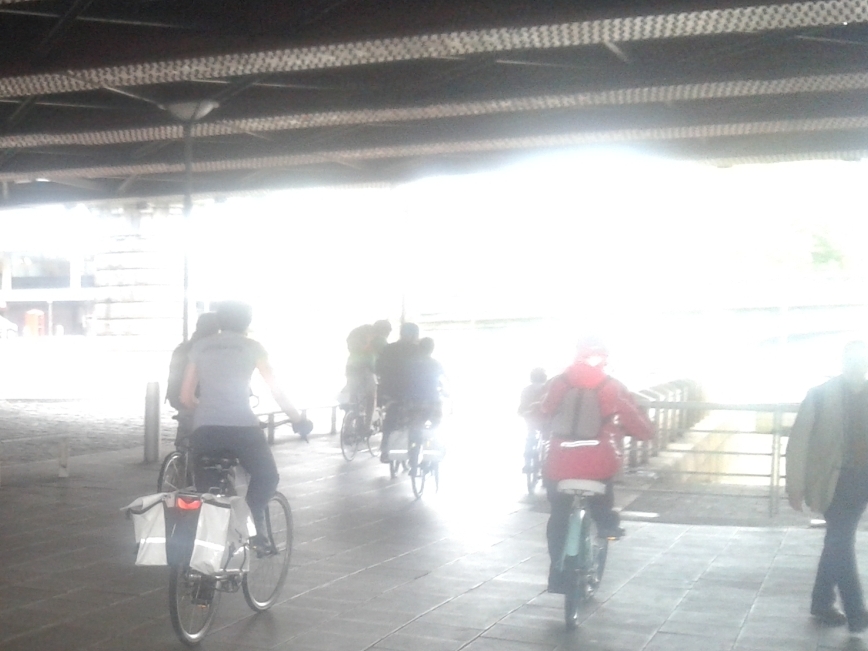