One of the things we hope We Walk, We Cycle, We Vote will do is to encourage people to reach out to their politicians (and candidates, come the elections) and let them know that things like active travel, and how our towns and cities are and could be, are important to them and why. We can quote all the reports and evidence that we like about the benefits of active travel – but none of it has anything like the impact of one of their constituents or a local group getting in touch with them directly, in their own words, and telling them what they would like to see changed.

Take HankChief, for example (@Hank_Chief on twitter). As he details on his blog, he started simply enough by inviting all his MSP candidates to Pedal on Parliament – easy enough to manage (we’ll be trying to collate lists of all the MSP candidates on the website soon enough to help out on that – and it looks like getting their twitter handles will be as important as email contact details…) – and he got three agreeing to turn up

Edin Western PPCs: Who wants Scotland to be a cycle friendly nation? Will you be @POPScotland 23.4.16? I will be. pic.twitter.com/NLK4j9IIko

Then an issue came up that he felt strongly about so he made contact again:

“When the SNP’s budget came out in December, I was disappointed that spending on Active Travel is flat year-on-year and still less than 2% of the Transport Budget, when their own target/aspiration is for 10% of journeys.

Of particular concern within the budget was the slashing of the “Cycling, Walking and Safer Routes” fund from £8m to £5.9m (bottom of http://www.gov.scot/Publications/2015/12/9056/16). This is one of the places that local authorities go to get money to match Sustrans money from the Community Links programme, so the reduction could make things really tricky for councils to get local schemes built.”

Again via Twitter, he got responses from three of his candidates:

I cycle to work, walk kids in, good for health &env't. I'd Improve cycle routes& allow bikes on buses like inCanada https://t.co/LPiilIMZsw

Not exactly signing up to our three asks – but a good start, and making politicians aware that active travel is something that their constituents care about. 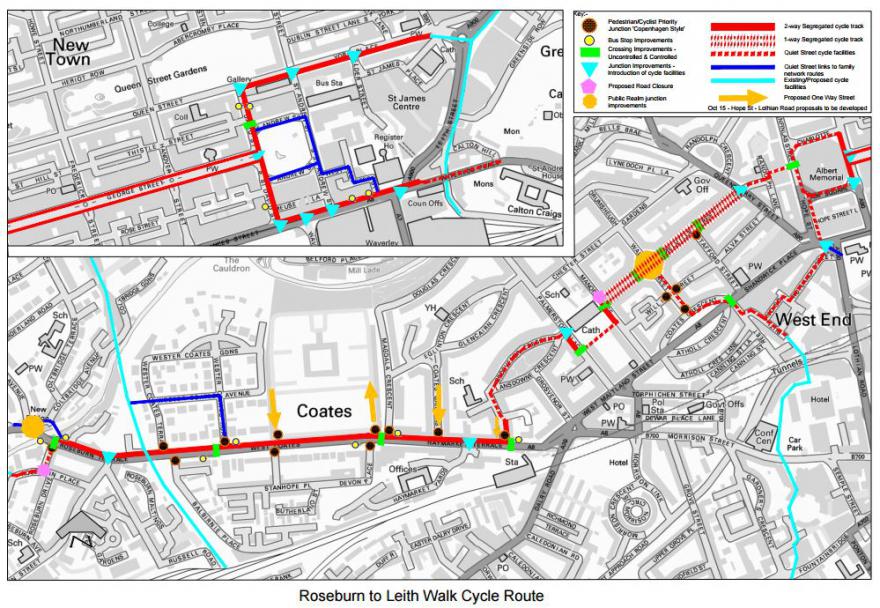 Then a local issue came up – plans to run a protected cycle lane in Edinburgh from Roseburn to Haymarket and on into the West End. Great news for HankChief and his kids who would finally have a safe route to cycle to the city centre. Unfortunately, one of the councillors for the area was opposing these plans – and HankChief took to twitter to find out why

As HankChief puts it in his blog:

“It is disappointing that a councillor (and member of the Capital Coalition) is openly criticising a scheme put forward by the council. I understand the desire to represent constituents and that the businesses on Roseburn Terrace may be fearful if change to the streetscape. However, the impacts on loading & parking will have been considered by the design team and as noted in my last blog there is evidence that less customers arrive by cars than estimated by shopkeepers and cycle lanes can improve shops’ turnover by making it a more inviting/easier place.”
Finally, coming out of that discussion, HankChief has now organised a tour with some of his local candidates to look at the issues he and his family face directly.

We’ll let you know how HankChief and his candidates get on – but this does go to show how, as voters, we have more of a voice than we might think over the policies that affect us. You don’t have to set up a petition, or arrange a cycle tour, or go to all the lengths that Henry has done. Simply inviting them to Pedal on Parliament is the easiest and one of the more effective things you can do – or you can follow Spokes’s lead and ask them to reverse the budget cuts to active travel as a number of people have already done. And once the conversation has started, then who knows where it will go …