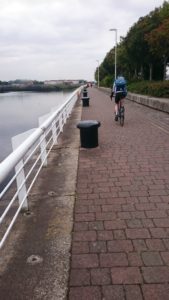 As sometimes happens I start thinking about work on my cycle into work! My commute takes me across Glasgow from west to east, along the Broomielaw path on the north side of the river Clyde, past the Squiggly (or Tradeston) Bridge. With the completion of the South West City Way between Tradeston and Pollokshields, the relatively new West City Way connecting the city centre with the west of the city (and rising usage on both routes), work starting on a South City Way and proposals for a ‘mini-Holland’ style development in Woodlands, it feels like there is real progress being made toward providing a good quality cycling and walking environment in Glasgow.

The area around the Squiggly Bridge is busy with walkers and cyclists and there is a buzz about the place – the good weather also helps. As I continue along the river past the Briggait I come to a stop at a crossing of a busy road leading to Glasgow Green. Although by no means perfect, this route feels safe because of the separation of cyclists and pedestrians from cars, lorries and buses. It is also sociable. I enjoy it for the people you meet on it and for those you don’t know, like the family that transports their very small children on two cargo bikes. This social aspect is not something that can be enjoyed by drivers and not something we would see without safe infrastructure separated from motorised traffic.

Into Glasgow Green, on a wide path which follows the river. I pass swans, geese, black-headed gulls and the odd cormorant, while rowers scull up and down the river. I leave the park heading to Bridgeton. At Bridgeton Cross you get the sense of a busy local hub for shopping and travel which has benefited from renovations to the built environment around the cross, including the repurposing of historic structures such as the Olympia building. At one side of the cross, there is a bike hire station. The scheme, established just prior to the Commonwealth Games, has been a great success with increasing numbers of hires and plans for expansion. It is arguably one of the few lasting health legacies of the Games.

But Bridgeton is also where the case for simply building new infrastructure starts to hit problems. Leaving Bridgeton Cross, a segregated cycle lane runs on one side of London Road and there is further segregated infrastructure around the Emirates arena. However I suspect a cycle counter on many of these routes would struggle to hit double figures on most days. This is where culture, preference and necessity become important. Glasgow has a growing ‘car dependency’ culture. Despite only 49% of households having access to a car in the city, car ownership continues to rise – in some Glasgow neighbourhoods over 75% of households have a car and across Scotland, over 25% of households have two cars. 50% of Glasgow’s school children currently walk to school, but 28% are driven to school – a much higher proportion than in other Scottish cities. In some of the more disadvantaged communities in Glasgow the issue of ‘forced car ownership’ has been identified. This is the notion that a small but growing proportion of poorer families despite financial difficulties see a car as a necessity to gain and maintain employment and to transport their children, perhaps in situations where public transport is lacking or expensive.

The stalling of the Bears Way cycle route in Bearsden and Milngavie and the removal of a new segregated cycle route on Holmston Road in Ayr are manifestations of the strength of our car dependency culture. The completion of the Bear’s Way will depend on changing people’s minds in the local community and in part this comes down to challenging a culture that puts car use above all. But why should we challenge this? Well there are many good reasons…

Global warming and climate change have been fuelled by our burning of hydrocarbons since the industrial revolution and in part have been driven, quite literally, by the growth of transport. The transport sector contributed to 25% of total Scottish carbon emissions in 2012 with 70% of these emissions derived from road transport. There has been no reduction in carbon emissions from transport since 1990 and road transport emissions have actually increased. Linked to this, it is estimated that air pollution accounts for 40,000 deaths in the UK, equating to between 2500-3500 deaths per year in Scotland. Transport sources contribute 40% of NOx (nitrogen oxide) emissions and 20% of PM10 emissions – two of the main air pollutants affecting human health. Changing the way we travel to more active and sustainable modes will directly help in reducing carbon emissions and air pollution.

Our sedentary lifestyles and an obesogenic environment contribute to two out of three adult Scots being overweight and three out of ten being obese, while just less than two-thirds of adults meet the physical activity guideline level. The 2016 Active Healthy Kids Scotland Report Card makes grim reading, in terms of the amount of time children in Scotland are sedentary, their low physical activity levels (only 21% of boys and 15% of girls achieve the recommended minimum of 60 minutes of daily moderate physical activity) and the relatively low levels of active travel to school.

Getting more children and adults travelling actively for short journeys will help to address these ‘lifestyle’ challenges. Declining functional active travel has been associated with population-level decreases in physical activity[i] and countries with the lowest levels of active travel generally have the highest obesity rates[ii]. In contrast, lower levels of BMI and fat have been associated with active commuting.

We need to address safety issues. We should not accept rising cycling casualties as inevitable as levels of cycling rise nor socioeconomic inequalities in risk whereby child pedestrian casualties are three times higher in the most deprived areas compared to the least deprived. And we know that safety concerns put people off cycling and letting their children walk to school, evidence from Glasgow shows that people appreciate the separation from traffic provided by segregated lanes. The introduction of 20mph speed limits in urban settings (for example the new scheme in Edinburgh) has the potential to reduce casualties and their severity, improve air quality and to encourage more people to travel actively.

We also need to think about what kind of communities we want to live in? The pedestrianisation of Buchanan Street in Glasgow and the centre of Milngavie in the 1970s were no doubt controversial at the time but would anyone  propose reintroducing cars to these streets now? Sometimes brave decisions are needed. The creation of better cycling and walking routes in our cities and towns, more pedestrianised areas and addressing parking blight would help transform local travel, and not only contribute to better physical and mental health but more vibrant local economies and more liveable communities.

Many European cities have invested in active travel and have been transformed from places that were car dependent, car dominated and congested, to places in which a variety of modes of travel are used, with public transport, walking and cycling much more prominent.

At a political level, we need to change mindsets. There is evidence from Europe that leadership, longterm commitment and sustained increased investment in active and sustainable travel, particularly infrastructure, can benefit public health and increase public support for such measures. There are signs of such positive developments in Scotland: Edinburgh’s commitment to increasing the share of the transport budget spent on cycling (currently 9% in 2016/17); and, Glasgow’s Strategic Plan for Cycling over the next 10 years, which aims to create an integrated network of cycling routes. But we need more and we need to shift investment toward more active and sutainable modes of transport. Part of this includes investment in public transport, particularly buses where passenger numbers have been in long term decline. This will enable more walking journeys and if the right regulatory conditions are in place, could provide cleaner, less polluting travel. Edinburgh has shown that a high quality bus franchise can increase bus use (slide 11) and start to address environmental issues.

I have tried to be positive in this piece about developments to support active and sustainable travel but I am also under no illusions that much, much more needs done. Nationally and locally, we need much greater investment in new active travel infrastructure, integrated with public transport, at a level sufficient to enable significant modal shifts towards more active and sustainable modes of transport to be achieved.

I cycle to and for work. Why? Because it is the easiest and the quickest way for me to get around the city, gives me flexibility, is inexpensive, gives me a bit of exercise and I have a pleasant journey to work. As we plan for the future, we need to create active, sustainable and integrated transport networks in our towns and cities that take into account people’s needs, preferences and motivations, so that more people choose to travel actively.

At a recent seminar we played a film showing how Glasgow gets to work from 1935. A lot has changed in 80 years, but is it so hard to imagine a film of Glasgow in the 2020s, where commuters on the Glasgow Bridge (crossing the river Clyde at Jamaica St) are travelling in low emission buses rather than trams, what was the horse and cart lane is now a segregated cycle route, many people are walking and the level of cars on the bridge has dropped to that seen in 1935?