On Saturday 19th October, We Walk, We Cycle, We Vote are running a free workshop, Active Travel for Everyone,  that will bring together cyclists, visually impaired people and wheelchair users to find common ground over what we want for our streets, towns and cities. Here, organiser Sally Hinchcliffe explains how it came about and why it’s so important.  You can also read her co-organiser Suzanne Forup’s take on her experiences here. 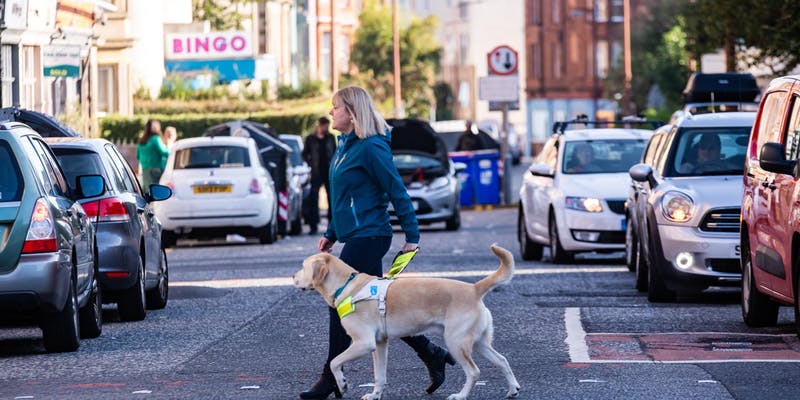 In recent years it has become well understood that if we want to see high levels of cycling, among people of all ages and abilities, we need to provide convenient routes that keep bikes safely separated from motorised traffic. However, this should not come at the expense of other vulnerable road users – particularly visually impaired pedestrians and the disabled. Even where designs have moved away from shared-use paths – which many pedestrians find intimidating to use alongside large numbers of fast-moving bikes (just as many cyclists don’t like mixing with fast and heavy traffic) – some recently built segregated cycle routes have introduced features which make it harder for others to get around.

Scotland’s design guidance for cycling infrastructure is in the process of being updated. With investment in cycling schemes stepping up a gear, we wanted to understand what were the most problematic features of the sorts of cycle routes being built, to ensure that increases in comfort for cyclists don’t come at the expense of people who have the greatest need for safe, well-designed streets in our towns and cities.

Over the summer we brought together small groups of local cycle campaigners, blind and partially sighted people, and wheelchair users  in a series of events to try and gain a greater understanding of each others’ needs. Together, we explored the surrounding streets and then took what we had learned from each other into a group discussion concentrating on the areas of agreement between us. For some of us it was a massive learning exercise as we started to understand how difficult it was for our fellow participants to navigate features of our streets that we took in our stride. As cyclists, we have become used to feeling that the streets around us aren’t quite designed to meet our needs – but we are immensely privileged in many ways compared to our companions and guides at these workshops. We are grateful for their time and their patience!

On the whole, what was encouraging was how much we did agree on. In particular, some areas stood out:

The key lessons for me, as an able-bodied cyclist, were:

We also had to face some uncomfortable truths. In particular, as campaigners, we need to recognise and acknowledge that bikes do present a specific hazard or worry for visually impaired people because they are so quiet and no amount of quoting statistics or saying ‘what about electric cars?’ will make that go away. Just as we rightly recognise that telling cyclists to ‘man up’ or get training to deal confidently with traffic is not an answer, we cannot brush aside the experiences of more vulnerable road users. This can also go for people with other impairments, some of which may not be immediately visible.

We also have to acknowledge that some common – and cherished – design features of current schemes present particular problems, especially to visually impaired people:

None of these issues are insurmountable, however. Decent design guidance, which takes into account the needs of everyone, should enable cycling schemes to be built that don’t impinge on the rights of the most vulnerable to get around. Indeed, with a little imagination and flexibility, we should create infrastructure that enhances our cities for everyone, whether they walk, cycle or wheel.

That is why we are inviting everyone who is interested in making our urban spaces work for everyone to a free workshop in Edinburgh on October 19th to start to find common ground. You can book your free space, and find out more, here.