Over the past century we’ve gradually seen our streets taken over, not just by traffic, but by the need to store parked cars. We’re so used to this, we barely notice the huge amound of space that parking takes up – acres of effectively dead space spread right across our towns and cities. If we want to rebalance our streets to meet the needs of everyone – and particularly children – then we have to start reimagining what we could do with all this public space. And what better way to do that than to actually take over a few of those parking spots and transform them, if only for a day? 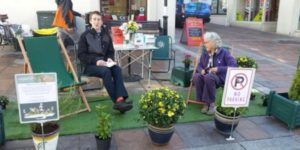 On Friday February 9th we’re taking part in the Firestarter festival which runs across Scotland celebrating creativity in public life. We’ll take over four parking spaces on Regent Road, outside St. Andrew’s House in Edinburgh- to turn an unpromising stretch of the A1 into a lively space for people. We will bring the pop-up park: some grass (well, astroturf), benches, fairy lights and greenery. All we need are the people to help to reanimate the space. If you can provide some sort of event (music, dancing, tai chi, games – you name it, as long as it can be fitted into four parking spaces) that would be fantastic. Otherwise why not drop by and see what’s going on? It could be anything from hula hooping to a human pyramid. Anything, indeed, but space for storing private cars.

It’s fair to say that 2016 has been an interesting year, in all senses of the word. In a scary and uncertain world, it can be hard to look forward and consider what might change it for the better, even in small ways. But hope springs eternal – and sometimes it’s the apparently small things that can make a real difference to people’s lives, even if they don’t always make the headlines. The thirty-plus groups behind We Walk, We Cycle, We Vote believe that making changes to enable people to walk or cycle are exactly the kind of thing that, while small in themselves, add up to a big change, and one that is ultimately for the better.

That’s why we want to hear your wishes for 2017. Large or small, we want to know what you’d like to see change next year, that would make it easier for you or your family or friends to walk or cycle. It could be a new footbridge, or a cycle path, or a road closed to rat-running traffic. It could be a route to your children’s school or your place of work or your nearest shops. It could be as small as a dropped kerb or as large as a cycle superhighway – or a whole network of them.

Together, large and small, these wishes could add up – maybe not to world peace, or global harmony, but at least to a healthier, happier country.

Let us know – either by email, twitter, or on our Facebook page – what you would wish for in 2017. But don’t just stop there. With local elections coming up in May, it’s your chance to influence the people who can make this happen. Let your existing local councillors know where your priorities lie, and tell your candidates as well when the time comes.

And be ambitious. Some of your wishes may seem unlikely to come true, especially if your current council seems to be more interested in easing the flow of motorised traffic than in walking or cycling. But you never know. If we have learned anything at all from 2016 it is that when it comes to elections, anything can happen. Perhaps it’s time to harness that for the good in 2017…

We were pleased to supply the Guardian Bike Blog with a summary of the responses we’ve had to the campaign so far, alongside some analysis of the party manifestos. You can find the article here:

Our third party conference ride gave us the opportunity to explore some of surprisingly attractive Dunfermline and discuss the importance of the right signage in the right place..

It was cold in Dunfermline on Saturday so I think someone at the Scottish Liberal Democrats took pity on me standing alone outside and triggered the fire alarm, causing all 400 or so delegates to join me in the Vine Centre car park for an impromptu discussion about the benefits of active travel and a quick distribution of our campaign postcards.

In a more scheduled appearance, the leader of the Scottish Liberal Democrats, Willie Rennie, joined us later for a chat about the campaign and how well designed infrastructure can cater for both the sports cyclist and family on bikes. As a keen cyclist and runner, Willie is very supportive of measures to get more people in Scotland more active.

Despite the cold and impending rain, a small band of resilient people on bikes launched off into the road as we were slightly confused as to where the shared use path started and stopped. Crossing a main road, it was good to be able to get straight across without being impeded by barriers.

The shared use path on the other side of the crossing took us onto this, a popular path linking the Dunfermline Queen Margaret station to the town centre. It wouldn’t cater for mass cycling, but it worked well for our little group and kept us safely away from the main road.

Unfortunately all good things come to an end and inevitably we were back onto the road, ‘sharing’ with the cars.

We stopped several times to view the cycle user signage to discuss its effectiveness on helping us to locate an appropriate route through the town.

Exhibit 1: Standing here at the end of the on road cycle markings, we could see a tantalizing path on the opposite side of the road. But with no drop curb or crossing you had to make a quick dash to get to it..

Exhibit 2:  This has two routes signed – one up a moss covered slope and the other into some bollards and a curb (or the pavement) – but no indication of where it might take you.

Compared to the signage you find in the Netherlands, you might find yourself needing a map quite often to get around in Scotland’s towns.

Exhibit 3: Most intriguingly we saw two segregated cycle path signs, but not a segregated path in sight.

Thank you so much to our friends at Dunfermline Cycling Club for coming out and literally showing us the way around Dunfermline! It’s a lovely town with a superb Abbey in its historic centre and it could be a great place to cycle with the right investment in its infrastructure (and some better signs).