Tomorrow is the local elections and with all but possibly a handful of last-minute responses in, we thought we’d give you a final look at the responses we’ve had over the past few weeks of campaigning (we already covered the manifestos, in case you missed it).

FIRST we’d like to start by thanking all of you who have emailed, tweeted, facebooked and otherwise taken the time to get in touch with your candidates – it’s makes a big difference as to whether we get a response and even if the answers aren’t quite what we’d want, it still means that candidates have had to think about where they stand on active travel – and also that they know it’s important to at least some of their voters. 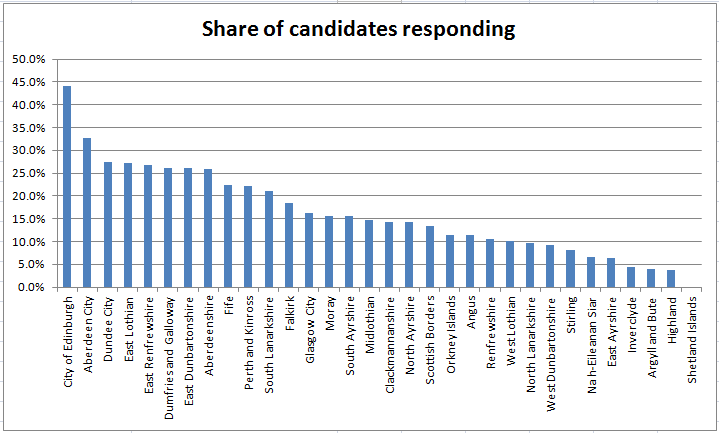 Overall (at the time of writing) we have had 444 of 2569 candidates who responded in one way or another to our asks – just over 17%. We never, sadly, got a reply from a candidate in Shetland (although we did hear from 4 in Orkney). At the other end of the scale, almost half of all candidates standing for election in Edinburgh have responded followed by Aberdeen (after a late surge!) at 32.7%, Dundee at 27.5%, East Lothian at 27.3% and East Renfrewshire at 27.3%. With strong support also in Dumfries and Galloway, Aberdeenshire and Fife, it’s not just council candidates in urban areas who see the benefit in active travel.

Looking at the responses by party the picture has changed a little from our update a week ago: 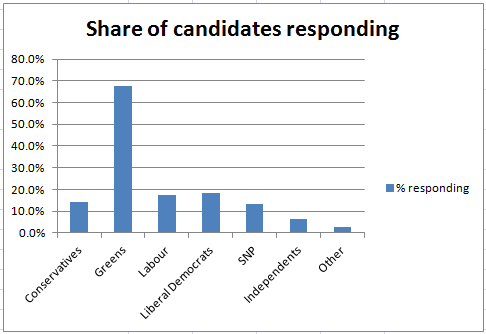 The Greens are still well out in front, with two-thirds of all Green party candidates having taken the time to get in touch and give their response. The Lib Dems have pulled into second place, at 18.1%, followed by Labour at 17.4%, the Tories at 14.2% and the SNP at 13.3%.

When it comes to the level of support for each of our three asks, the differences have widened slightly on the investment question, with the Tories most likely to be cautious about committing themselves to a figure of 10%, followed by Labour.

And removing local barriers remains somewhere between the two.

Don’t forget to get the final picture of where your individual candidates stand here – which will also allow you to see the relevant local manifesto commitments where available.

So now, all that remains is for all of us to complete the third part of our campaign name and actually go out and vote tomorrow!