With just over a week to go before the elections, we’ve been crunching the numbers again. We’ve now had more than 350 candidates respond in some way or another to our three asks – which is over 13% of the 2,569 candidates standing in total.

You can see the full table online, but here’s an overview of which candidates have responded by party: 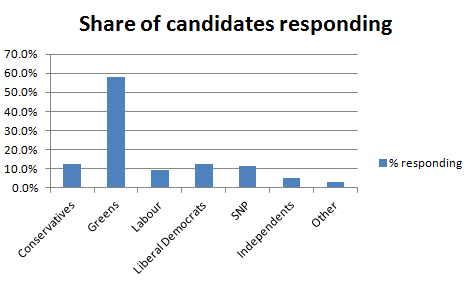 Of course responding is one thing – the more interesting question is whether candidates actually support our asks or not. At the moment, almost every candidate who has actually responded has done so positively, either fully or partially supporting some or all of our pledges, but the parties do vary somewhat as to the degree of support. The graphs below show the share of all candidates standing who have either partially or fully supported each ask, by party. The difference is clearest when it comes to our question on investment:

Perhaps because this is the most ‘measurable’ of the asks, it’s tended to attract the most cautious replies, particularly among Conservatives. Looking at the individual responses, this seems to be a mixture of candidates not wanting to commit themselves to a figure, or feeling that 10% of the transport budget is too high.

Support for decent ‘all ability’ infrastructure has attracted the most whole-hearted support – it’s clear that most candidates recognise that if we’re going to build cycle paths, then it’s worth doing it properly.

Support for removing local barriers was somewhere in the middle – and when you analyse individual candidate responses it’s clear that some of them have taken ‘barriers’ fairly literally, to mean the removal of bollards or other obstructions on cycle paths, which might explain why some are less enthusiastic! Clearly we need to work on our wording – but if you’re contacting your candidates you might want to explain that this is the removal of any kind of barrier, which could translate into the need for a dropped kerb or a new pedestrian crossing, as much as removing an actual physical barrier.

We’ve also now added several party manifestos to our candidate information base so even if your candidate hasn’t responded you can still find out where your local parties stand (and they vary widely from local authority area to local authority area!). But we’d still rather hear from the candidates directly if we can. Not only does it mean they’ve had to think about active travel and realise it’s an issue for some of their voters – remember, they’ll be hearing all about parking and potholes from others – but because some of the individual responses have been great. We’ve been heartened to learn how many of our wannabe councillors actually get the issues, ride a bike and walk themselves, and are excited about our campaign!

We’ve a week to go, so there’s still time for more responses! We’ll be updating our website every night with new data so keep on contacting your councillors and letting them know we want to hear from them! They can email us on contact@walkwheelcyclevote.scot, contact us on Twitter at @walkcyclevote or just fill in our super-quick candidates’ survey.

NB: If you’re interested in the actual data you can see the figures here.