Our gallery of images show active travel in all its forms as desirable, normal activities in recognisably Scottish locations. They are available to use, with credit, for campaigning purposes.

Want to make a splash with your campaigning? Here are some imaginative ways to make the case for active travel 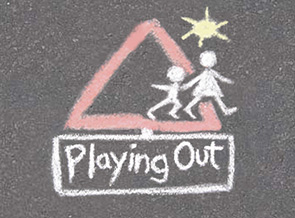 Temporary road closures allowing children to play out are great for kids’ health and well-being – and they’re also a really simple but incredibly effective way to get local communities to start to see their streets differently.  The process of organising a play street brings residents together, and reminds us of the freedoms many children today have lost (many of us may ourselves have played out quite freely as children but now could not imagine it for our own children or grandchildren).  Playing Out are a brilliant group who support residents in organising their own street play sessions. And for an idea of how radicalising this simple idea can be, read Clare Rogers’ blog on her journey from car-driving mum to committed campaigner – starting with a play street.

DIY streets are (usually) bottom up interventions that trial street changes with local residents to make them places for people rather than (or as well as) cars. TheSustrans have produced a simple guide to doing your own project, and they have a street design kit that can roll out temporary seating, traffic calming and other measures to trial interventions quickly and easily.

While DIY Streets projects tend to work in partnership with local authorities, guerrilla interventions take the approach that it is better to ‘ask forgiveness than permission’. They are instant, anonymous, overnight and (crucially) non-damaging changes which highlight a problem or propose a solution in a concrete and sometimes amusing way. ‘Trash’ bike lanes, pothole gardens, toilet-plunger protected bike lanes and even yarn-bombed obstructions can all catch the attention of the local media. Even though the authorities will generally act quickly to remove them, it is surprising how often they result in the desired changes a few months down the line

Group glues 120 toilet plungers onto Omaha street to show what a protected bike lane could do https://t.co/5XHamPfqwC pic.twitter.com/sxr5d31HIU

Human bike lanes started in San Francisco and have since spread to Dublin, New York, London, and now Edinburgh with the ‘human bollards’ protecting the Leith Walk lanes after trial armadillos were removed without any (apparent) plans to replace them with something more robust. By putting their own vulnerable human bodies between traffic and bike lanes, campaigners make a powerful visual statement about how protection is needed. They also bear witness to the need to protect lanes from drifting vehicles and parked cars.  Easy to run as a pop-up campaign, all you need is enough people, and a bike lane wide enough to still be usable with people standing along them (this may be the hard part in the UK). They seem to be pretty effective too – embarrassing officials into at least considering more substantial segregation than just painted lines.

The Cycling Embassy of Great Britain have created a simple but powerful visual tool that allows you to highlight cycling conditions (and especially poorly designed cycling infrastructure) that looks and feels too dangerous for all but the most hardy cyclists to use. By imagining the viewer to put a loved one on a bike into that situation, it exposes how bad design can actually make cycling conditions worse.  It’s most effective used as part of a wider campaign, combined with positive images of what can be done (such as the Cycling Embassy’s Good Cycling Facility of the Week which shows examples of world-class infrastructure that enables people of all ages and abilities to cycle safely).

Although Parking Day was originally conceived more as an artistic intervention than a campaigning one, the idea of taking a parking space and transforming it into a pop-up park is another fantastic way to temporarily transform a car-dominated space into a place for people. Taking place on the third Friday in September, it’s normally warm enough for people to linger and enjoy the resulting parklet. In Hackney, Brenda Puech took it further and attempted to use a residents’ parking permit to create a permanent ‘people parking spot‘ – she was told to take it down, but the council has since relented and is now embracing the idea of parklets where once there were parked cars. Other cities and councils have embraced Parking Day and in some cases use it to trial parklets and build support for street changes – or you can just pay for a parking space and and go it alone.

When campaigners make the case for taking space away from cars and using it for people on foot or on bikes instead, the objection is often raised that there simply isn’t room. “Sneckdowns” (snow neckdowns) use snowy days to show how little of the road space cars actually use – and how the space could be better used to make it easier to cross roads, slowing turning traffic, or giving some of that excess tarmac over to wider pavements or bike lanes.  When it snows, head out to grab photographs of where the cars and other traffic has been – and if you don’t get a lot of snow, leaves will do too.