Sustrans Scotland are one of our supporting organisations, and here Kate Campbell, Sustrans Scotland Deputy Director (Behaviour Change) reports on their Bike Life report – which shows strong support for our three pledges.

Sustrans Scotland and City of Edinburgh Council have released a ground-breaking report – Bike Life Edinburgh – which recorded the views of over a thousand Edinburgh residents. The report is based on the Copenhagen Bicycle Account, which helped to make Denmark’s capital one of the world’s most bike-friendly and ‘liveable’ cities.

The Edinburgh Bike Life report is packed with statistics. In fact, we’re confident it’s the biggest and most extensive cycling survey ever carried out in Scotland. The overall message is clear: the capital’s residents want to see more people choosing to travel by bike and they want to see government – national and local – investing more to make this reality. Three-quarters (74%) of those surveyed said they want more spent on cycling. And, the average amount people wanted to see invested from national and local transport budgets was £23 per person per year. 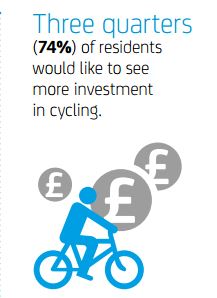 It’s clear, then, that people want our politicians to continue to show leadership when it comes to investment, and build on the progress that’s already been made. At the national level, we welcome that the Scottish Government has matched last year’s record investment in cycling and walking. And, in Edinburgh the Council is leading the way, by investing 8% of its transport budget in cycling alone this year. What Bike Life Edinburgh tells us is that our politicians have the backing of the public to do more to enable people to choose healthy, clean and cheap journeys, by getting on a bike.

Another big message from Bike Life relates to safety. Of those surveyed in the city, 8 in 10 want improved safety for people riding bikes. People also made clear the kinds of changes they’d like to see to get more people cycling. The report shows that, overwhelmingly, people want segregated bike lanes. 91% of people who do not ride a bike but would like to, and 86% of occasional bike riders say that kerb-protected bike lines would help them to start cycling, or cycle more.

With segregated bike routes starting to open across Scotland, it’s clear that things are moving in the right direction. A number of big, bold partially or fully-segregated cycle routes have opened in the last couple of months. In East Dunbartonshire, the first phase of the Bears Way route has been launched and the next phase is now being consulted on. Earlier this month, in Edinburgh, the Innocent to Meadows route was opened. And, in Glasgow, the South West City Way is now finished and open to cyclists. We think projects like these could be game-changers for cycling here in Scotland and Edinburgh Bike Life suggests people would like to see more of them.

So, Bike Life Edinburgh tells us people want to see investment in cycling continue to increase. Safety remains a big barrier to getting more people on a bike. And, residents want protected cycling routes to increase cycling levels in the city. People, in Edinburgh, have delivered a clear message: they want investment, infrastructure and improved safety. And, they’ve sent this message just in time for next year’s Holyrood elections.

One thought on “Sustrans Scotland Guest Post: Giving the people what they want”